During the observation period for 2011–2015 in the Republic of Khakassia it has been revealed that 63.2 % of samples of drinking water contain the excess of А α due to natural radionuclides 234 U, 238 U. Within the limits of MPC the carcinogenic hazardous substances: cadmium, lead, arsenic, beryllium, chromium have been detected.

The contribution of drinking water into primary ontological morbidity of population in administrative territories of the Republic was equaled to 0.5–1 %. Therefore, currently, the events aimed at reducing the carcinogenic risks caused by drinking water are not required. At the same time, due to the high seismic activity in the Republic for the last five years, the laboratory monitoring of drinking water on indicators of radiation safety and the evaluation of the carcinogenic risks continues in the prescribed amount. 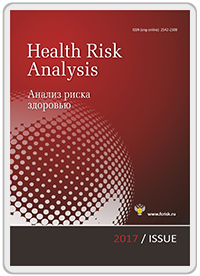